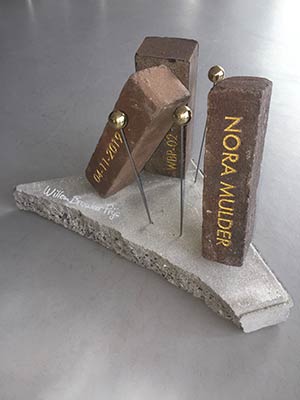 Jury report Willem Breuker Prijs 2019 – Nora Mulder
It’s hard to label Nora Mulder. Although the term ‘performing musician’ applies to her, it falls short of her tremendous qualities: she is a truly creative spirit, an improviser, and an extremely gifted pianist. She is an original creator deploying a plethora of musical activities and qualities

Where should one begin? Nora Mulder is active in the world of composed as well as improvised music, but also in musical theatre, noise, performance art and film music. She performs as a soloist, with her own groups, and as a guest with various ensembles, orchestras, theatre and dance troupes. She collaborates with actors, philosophers, chefs, visual artists and with whomever would like to challenge her. She deliberately stays off the beaten track and chooses her own path without conforming to standard performing practices, styles, genres, tastes or habits. She is always looking for the moment where beauty, pleasure and mystery go hand in hand. WHERE should concerts take place, HOW should concerts take place and WHAT should happen at concerts? For Nora Mulder these questions are totally irrelevant. She just as easily performs at the prestigious Amsterdam Concertgebouw as in grimy cellars, on windy plains or sticky stages, in a morph suit, jeans, T-shirt or in immaculate black.

She initiates collaborations with various musicians and other performers to avidly explore new instrumental combinations and broaden the languages of music and the theatre. She is the driving force behind the group 7090 in which she performs extremely demanding pieces by composers like Iannis Xenakis at the highest level, but has also developed an original form of absurdist musical theatre, taking her to undiscovered nooks and crannies of the world to perform. In a graphic review, daily newspaper De Volkskrant had this to say about the musical theatre performance ‘From Kart to Camper’, by the groups 7090 and Trolleybus: “Mulder picks up an accordion and attaches the instrument to her thighs. She then moves her legs slowly to and fro. It feels intimate, albeit somewhat awkward, too. She picks up the pace, gives it her all, in danger of harming her hamstrings: it’s a physical fight to the finish, leaving both the instrument and the instrumentalist gasping for breath.“

The ensemble Picatrix leaves us listeners gasping for breath. Three ladies employ an incredible richness in vocal and instrumental ideas to even suggest Renaissance harmonies or African folk music.
Apart from the piano, accordion and harpsichord, Nora Mulder also plays the cimbalom and the electric clavichord. In addition she also develops her own instruments. For the Ensemble Extra Ordinaire, in which she has teamed up with singer Han Buhrs, she found new musical ways, using feedback buckets, an air bed pump, toffee tin bass, fire screen and long-forgotten organs. Tonal colours are out there to explore, aren’t they?

Nora Mulder is a truly authentic, musically erudite and idiosyncratic musician, who more than meets the term ‘people’s music’ that Willem Breuker once coined.